The god of wealth

This is a young man with a protruding belly holding a Mongoose shaped money bag in his left hand, and in his right hand holding a citrus fruit 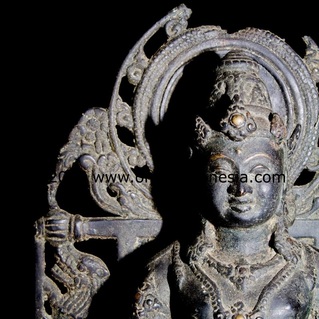 At his feet are pots over flowing with coins, pears and Jewelry, and this God is very popular.


The quality of the Bronze is evident of it's age displaying an Elephant, a Lion, on the back of his headrest of the chair, which will identify him as Zambala, the Buddhist equivalent of the Hindu Kuvera.

The Prabha Mandal and the disc shape at the top of the figure both attributes of Buddhist divinities confirm the Indian Traditions.

Kubera and Goddess LakshmiAccording to Hindu mythology Kubera is the god of wealth and son of Sage Vishrava who is the son of Lord Brahma. Kubera is widely known as the gods appointed guardian of the treasures of the gods and the nine special treasures of indefinite significance.
But he is also the King of Yakshas and one of the Ashta-Dikpalas, representing the north direction. He is also referred to as Kuvera, Kuber, Dhanapati and Vaisravana.

Kubers residence Lanka which he captured from the Demons was captured back by his half brother Ravana. When Ravana captured Lanka, Kubera moved to palace on Mount Kailash, in the Himalayas. Kubera is normally assumed as a dwarf with an ugly and deformed body having three legs, one eye smaller than the other and having only eight teeth.
Because of his deformity Lord Brahma gifted him the Chariot Pushpak built by Vishwakarma, the architect of Gods. The magic Chariot Pushpak was stolen by Ravana and used for his misdeeds. This chariot, however, was handed back to him by Lord Ram after defeating Ravana. As the God of wealth and material, his responsibilities are to distribute them while creating wealth is with Goddess Lakshmi. It is believed that Kubera flies in his Pushpak to distribute wealth to his devotees assisted by the Kinnaras and their female counterparts, the Kinnoris.

Kubera is said to have given a loan to Lord Venkateshwara for his marriage with Padmavati. According to the Vishnupuran the repayment will go on till the end of Kaliyuga. It is said that one who worships Kubera and Lakshmi together can never fall short of money and material comforts. By worshiping Goddess Lakshmi and Kubera together brings prosperity to the devotee by drawing new avenues and sources of income. Special puja of Kubera is performed by Hindus on festivals like Deepawali, Dusshera and Dhantriyodasi.

Power & Wealth
For at least 2000 years in many parts of ancestral Southeast Asia, power and wealth have been accrued by noble families, with social relations within a community ordered in hierarchical ways. Villages are divided between dominant and subservient clans and lineages, and governed accordingly. The superiority of one family over another is often dependent on genealogical and legendary descent from the founding ancestors of the village. This link to the ancestors ensures that the leading families control ritual activities and the opening of new agricultural land. The nobles who dwell in the great house claim direct descent from its original founders and to the inherited wealth and power imbued in the heirlooms of the house.

In some communities, and in certain arenas of endeavour, high status can be earned. Prowess in fields deemed economically and spiritually important can cement the fame of certain individuals, especially within the elite families. For women this is pertinent to skill in textile making, and especially a remarkable knowledge of dyeing. The feats of male warriors, headhunters, or great voyagers who return with exotic and rare objects for the family treasury, are much admired and rewarded with high status, often visually marked by distinctive accoutrements.