The people of southern Borneo can be grouped into four main categories : Malay, Migrant, Dayak and Ot. 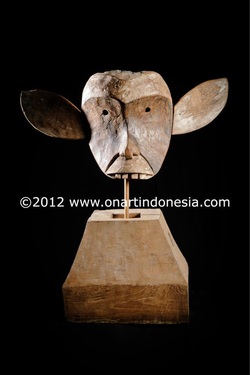 The name "Dayak" is a collective term used to describe a number of primarily non-Muslim ethnic and linguistic groups. Those who convert to Islam usually retain their Dayak tongue for a while, but they prefer to be called Orang Melayu, rather than Dayak. Living along the banks of the large river systems, the Dayak grow rice using the "slash and burn" technique. They also collect forest products such as rattan, ironwood, rubber, resin, and animal skins.

This mask is from West Kalimantan area (Dayak)
Selako is a branch of Dayak people from the Borneo island.
Hand carved wood and used for ceremonial purposes prior to the beginning of a new rice cycle.
Little is known about the precise function of this mask.
The stylized design occurs frequently and probably represents a spiritual, mythological or anecdotal figure.

In the 19th century, the name of 'Land-­‐Dayak' was introduced from Sarawak, to distinguish the Dayak living in the hinterlands from the Dayak, which are called 'Sea-­‐Dayak', or Iban, which mainly live in Sarawak. Populations which are counted in as 'Land-­‐ Dayak' are those which live along the middle-­‐stream Kapuas: the Selako, Singgi, Jagoi, Sadung and populations which live along the upper-­‐stream Sanggau and Sekayan.
Just like the Iban, of which 7,000 of them live in West Kalimantan, these populations speak languages which are related with Malay.
Remains of the Hindu culture from the first millennium prove that the Dayak from the Kapuas are influenced from outside for centuries. Later the Javanese kingdom of Majapahit had influence on the coastal area. It is believed that the arrival of the first Javanese started the migration of the Iban and Land-­‐Dayak, which first lived in Southwest Borneo.
Not long after the fall and Islamisation of the Hindu kingdom of Majapahit in the 15th century, the Land-­‐ Dayak had to deal with Islamisation by the sultans along the coast. They ruled over trade and often the Dayak were exploited. With the gradual colonization of the hinterlands, the Dutch stopped the Islamisation and stimulated the christian mission among the Land-­‐Dayak. The Land-­‐Dayak lived in longhouses, but their villages also have special mens-­‐houses as well: circular buildings with a high, cone-­‐ shaped roof in which ceremonies and meetings were held. Some of these partially disappeared buildings were built on 10 meter high pawls with a hatch as entrance.

The Dayak used to bring sacrifices, consisting of dog meat with human blood, to their god of war.
Successful warriors ate a mix of human brains and rice-­‐wine. When the chief died, his image was cut out of a thick pillar, where a beheaded head was sacrificed.

Metal-working is elaborately used for making mandaus (machetes - 'parang' in Indonesian ). The blade is made of a softer iron, to prevent breakage, with a narrow strip of a harder iron wedged into a slot in the cutting edge for sharpness. The headhunting necessitated being able to draw the parang quickly. For this purpose, the mandau is fairly short, which also better serves the purpose of trailcutting in dense forest. It is holstered with the cutting edge facing upwards and at that side there is an upward protrusion on the handle, so it can be drawn very quickly with the side of the hand without having to reach over and grasp the handle first.

The hand can then grasp the handle while it is being drawn. The combination of these three factors (short, cutting edge up and protrusion) makes for an extremely fast drawing-action. The ceremonial mandaus used for dances are as beautifully adorned with feathers as the dresses are. There are various terms to describe different types of Dayak blades. The Nyabor is the traditional Iban Scimitar, Parang Ilang is common to Kayan and Kenyah Swordsmiths, and Duku is a multipurpose farm tool and machete of sorts.