Balinese Hinduism has roots in india 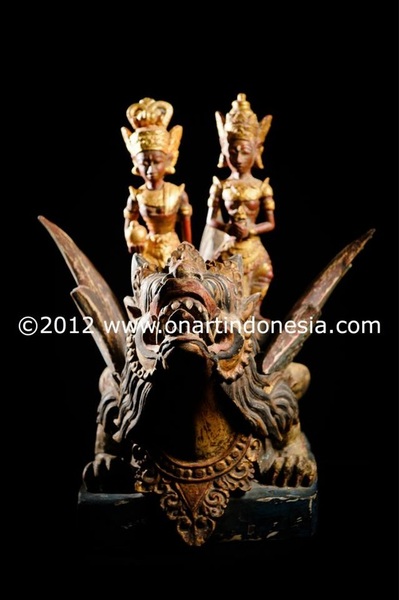 The God Dewa Semara, and the Goddess Dewi Ratih. In the modern world we call this couple, the Romeo and Juliette of Bali.

When Islam surpassed Hinduism in Java (16th century), Bali became a refuge for many Hindus. Balinese Hinduism is an amalgam in which gods and demigods are worshiped together with Buddhist heroes, the spirits of ancestors, indigenous agricultural deities and sacred places. Religion as it is practiced in Bali is a composite belief system that embraces not only theology, philosophy, and mythology, but ancestor worship, animism and magic.

It pervades nearly every aspect of traditional life. Caste is observed, though less strictly than in India. With an estimated 20,000 Puras (temples) and shrines, Bali is known as the "Island of a Thousand Puras", or "Island of the Gods".

Hinduism and in Buddhism, and adopted the animistic traditions of the indigenous people. This influence strengthened the belief that the gods and goddesses are present in all things. Every element of nature, therefore, possesses its own power, which reflects the power of the gods. A rock, tree, dagger, or woven cloth is a potential home for spirits whose energy can be directed for good or evil. Balinese Hinduism is deeply interwoven with art and ritual.

Ritualizing states of self-control are a notable feature of religious expression among the people, who for this reason have become famous for their graceful and decorous behavior.

Apart from the majority of Balinese Hindus, there also exist Chinese immigrants whose traditions have melded with that of the locals. As a result, these Sino-Balinese not only embrace their original religion, which is a mixture of Buddhism, Christianity, Taoism and Confucianism, but also find a way to harmonize it with the local traditions. Hence, it is not uncommon to find local Sino-Balinese during the local temple's odalan (Birthday). Moreover, Balinese Hindu priests are invited to perform rites alongside a Chinese priest in the event of the death of a Sino- Balinese. Nevertheless, the Sino-Balinese claim to embrace Buddhism for administrative purposes, such as their Identity Cards.