The earliest historical record about Timor Island dates of around 14th Century.
It was identified by the Javanese as Timur, as an Island within the Majapahit’s realm.

The Majapahit Era dates from 1293 to 1500’s. And was the largest Kingdom of Indonesia, and consisted of Java, Sumatra, Bali, Timor and Malaya.

The Dutch settled in the west Timor and the Portuguese to the east in the 17th Century.
The Bounty mutineers landed here in 1791.
Geographically Timor emerged from the depth of ocean 40million years ago, and is related to Australia with no Volcanoes, as in the rest of Indonesia. The line of Volcanoes that runs the length of Indonesia archipelago from Sumatra to Flores skirts Timor and continues north to the Island of Maluku. Timor once part of Australian continental shelf was submerged and which drifted from the Australian landmass and it moved northward and collided with the Eurasian plate.

Evidence of modern human settlement on Timor dates back at least 13,000 years, when the Austronesia peoples of Asia migrated throughout the Eastern islands.

These hunter-gathers were joined by later migrants from Asia, who introduced agriculture around 2000BC.

Little is known of Timor before 1500AD, though Chinese and Javanese traders visited the Island from at least the 13th century, and possibly as early as the 7th century.

Timor was divided into a number of small kingdoms, tribal grouping involved frequent skirmishes, and head-hunting a popular activity.

The Dawan (or Atoni) people, thought to be the earliest inhabitants of Timor, were the largest group in western Timor, but were divided into numerous small kingdoms.

The Tetum (or Belu) people, the other major ethnic group, migrated to Timor in the 14th Century, settling in the fertile central regions and pushing the Dwan westwards.
The origins are uncertain, but they call their homeland Malaka, and they may well have migrated from the Malay Peninsula.

TIMOR MASKS
These masks are old, rare Tribal masks from the Island of Timor; they are museum, collector quality pieces.
The masks are believed to be a medium to the spirit world, and a way for the living to communicate with their departed Ancestors and Spirits.
The type of wood used is a hardwood, and all the masks are hand carved during this era. 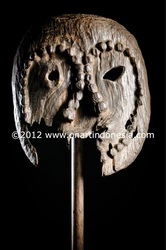 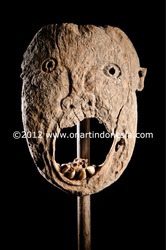 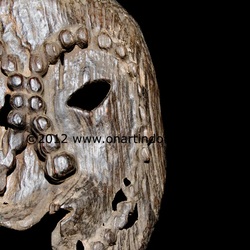 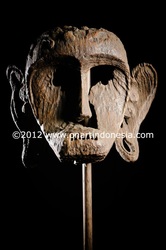 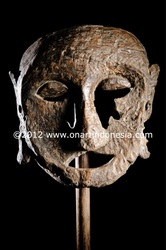 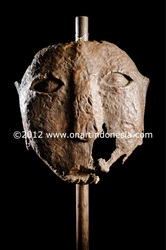