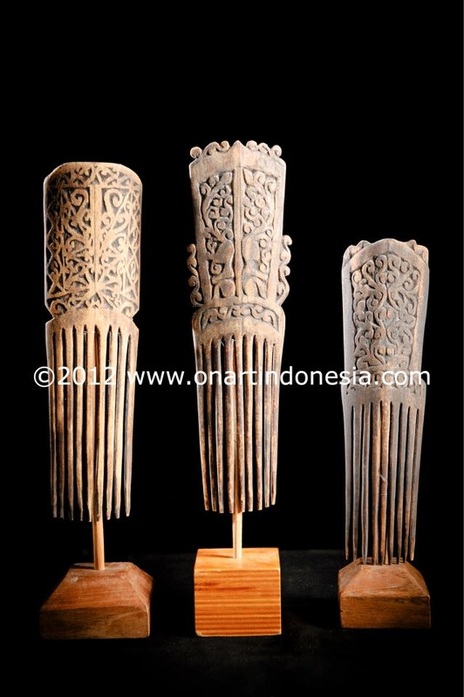 The combs are known as hai kara jangga and are placed upstanding over the brow or high on the head, crown-like and held in place by ribbons or a band.

They are hand carved from mottled tortoiseshell (from both thick and thin plates) or occasionally from buffalo horn. Once carved and polished, they are deeply curved in the horizontal plane almost to a semi-circle – there is no curvature in the vertical plane.

The combs all follow a basic format: an upper pierced heading separated from the teeth by a band of solid tortoiseshell displaying engraved linear geometric decoration.

The carved decorative headings, which vary from comb to comb, are designed symmetrically on either side of the central motif, each with various images in silhouette of stylised animals, birds, fish, trees and sometimes the human figure.

They have recognisable symbolic meaning within the mythology of the Island’s culture – for instance, the horse represents loyalty, the chicken wealth.
The skull trees (andung trees), featured as the central motif on many examples, were once used to display captured heads from hostile encounters and inter-village warfare.
The motifs depicted on the combs echo those of the Ikat woven textiles of the region or on some of their standing stone monuments.
read more about THE COMB / The History & Development